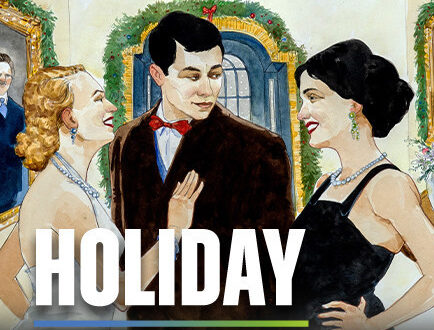 Arena Stage at the Mead Center for American Theater announced today the cast of its new production of Philip Barry’s Holiday, a classic romantic comedy about the haves, have-nots, and pursuing a life worth living. The 1928 Broadway hit play was famously adapted into a 1938 motion picture directed by George Cukor and starring Cary Grant and Katharine Hepburn.

Written by Philip Barry (The Joyous Season, The Philadelphia Story), Holiday follows Johnny Case, an up-and-coming Wall Street lawyer from a working-class family who aspires to quit work and enjoy life once he’s made enough money to do so. This prospect doesn’t thrill his wealthy, well-born fiancée Julia, but excites her more unconventional sister Linda. Can his dreams survive his soon-to-be bride’s narrow view of affluence?

Arena’s own Director of Community Engagement/Senior Artistic Advisor Anita Maynard-Losh (Catch Me If You Can, Disney’s Newsies) will direct the in-the-round production on Arena’s Fichandler Stage. “I fell in love with Holiday when I was 15 years old, and still have the copy I bought from a used bookstore in San Francisco at the time,” says Maynard-Losh. “I am delighted that Molly Smith asked me to direct it here at Arena Stage so many years later!”

Though nearly a century old, Holiday remains a timely commentary on opposing societal hierarchies, differing views of success, and ultimately, how to pursue a life worth living.

At its heart, I think it asks the questions, ‘What is our responsibility to ourselves to follow our dreams and create the life we want to live? And what are we willing to sacrifice in order to be true to ourselves?  In a way it’s a subversive anti-capitalist play in the trappings of a romantic comedy — although it definitely is a comedy, and it is romantic, Holiday also has a message about the freedom to decide how to live one’s best life, and whether money is a tool or a trophy.  — Maynard-Losh