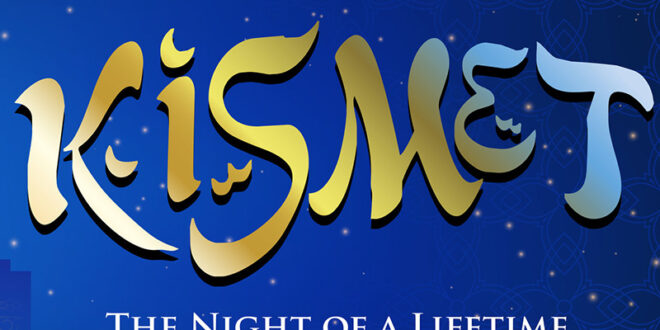 KISMET‘s unique, one weekend only run, comes to The Granada Theatre October 23-24, 2021 for three performances only.

Sara Miller McCune, Producer shares, “I fell in love with live theater as a teenager growing up in NYC and remember seeing the original production of KISMET on Broadway, and then, many years later, a wonderful revival at Lincoln Center. When I thought for the first time about what I wanted to do for my 80th birthday, my immediate wish was to bring KISMET to Santa Barbara to share the fabulous music and love stories with friends, colleagues and the region. There was no other production I felt would be as fabulous and yet less well known out here. I was confident that Ken Davenport was the one who could help me bring this dream to fruition. The theater and the arts have enriched my life so much and I can’t think of a better gift for the Santa Barbara region.”

The production boasts script and choreography reimagined for a contemporary audience while remaining true to the classic story, exotic setting, humor, and music audiences have loved for decades. Utilizing cultural consultant Naila Al-Atrash (NYU), accurate and appropriate recreations of the Middle Eastern inspired world was ensured. The original score from Alexander Borodin is under the direction of Nir Kabaretti and The Santa Barbara Symphony, with brand new choreography from State Street Ballet’s co-artistic director, William Soleau.

Director, Lonny Price shares, “KISMET boasts one of the most magnificent scores ever heard on a Broadway stage. Our dream was to have a production cast with as many MENASA (Middle Eastern, North Africa, South Asian) performers as we could find to add a genuine authenticity to the show and honor the magnificent traditions and cultures that this musical reflects. I am so happy to say, I think this may be the most authentic cast to play this show, ever!”

William Soleau, Choreographer/Co-Artistic Director, State Street Ballet adds, “Times have changed since the 50’s and Lonny Price wanted a brand new, top to bottom, original interpretation of this musical. We are using full blown dance numbers to move the narrative forward and it is a dream to be able to revive this classic, Tony Award®-winning show.”

Nir Kabaretti, Music and Artistic Director, Santa Barbara Symphony shares, “We chose this collaboration to open our season because it exemplifies the diversity and breadth of symphonic music. Derived from the great music of Russian classical composer Alexander Borodin, KISMET provides one of the most symphonic scores of Broadway musicals. The rich and energetic music combines lyrical moments with exotic themes and Jazz elements, all brilliantly and colorfully orchestrated.”

Ken Davenport, Executive Producers says, “It is an honor to assist Ms. McCune in bringing her vision to life and to help with her mission of supporting the incredible arts community of Santa Barbara and artists everywhere.”